There are certain elementary statements, which are self evident and which are accepted without any questions. These are called axioms.

Draw a line segment AB of length 10cm. Draw a second line CD having length equal to that of AB, using a compass. Measure the length of CD. We see that, CD = 10cm.

Axiom 2: If equals are added to equals, the wholes are equal.

Suppose we have two line segments AB and DE of equal length. Add BC to AB and add EF to DE. If BC = EF, then AC = DF.

Axiom 3: If equals are subtracted from equals, then the remainders are equal.

Suppose we have two line segments of equal length. Remove BC from AC and EF from DE respectively. If BC = EF, then AB = DE.

Axiom 4: Things which coincide with one another must be equal to one another.

This means that if two geometric figures can fit completely one in to another, they are essentially the same.

Axiom 5: The whole is greater than the part.

Take a container of water. Remove some water from it. Will the remaining volume of water the same as the original volume?

Postulates in geometry are very similar to axioms, self-evident truths, and beliefs in logic, political philosophy and personal decision-making.

They are as follows:

EXERCISE 3.1.2
1. What are undefined objects in Euclid’s geometry?
Solution:

Points, line, plane are the undefined objects in Euclid’s geometry.

2. What are the difference between an axiom and a postulate?
Solution:

Axioms are elementary statements , which are self evident and which are accepted without questions

Postulates are statements which are particular to Geometry and accepted without question.

3. Give an example for the following axioms from your experience:
a) If equals are added to equals , the wholes are equal.
Solution:

b) The whole is greater than the part .
Solution:

Our hard is not part of our body. It is smaller than the body.

4. What is the need of introducing axioms?
Solution:

Greek mathematicians while developing geometry as a pure deductive science. They had to depend on certain primitive notions like points, straight lines, planes and space. But this was not enough to deduce everything . They had to set up certain statements, whose validity was accepted unquestionably thus there was a need of introducing axioms.

5. You have seen earlier that the set of all natural numbers is closed under additional (closure property). Is this an axiom or same thing you can prove?

Suppose we have a ray OA on a plane with end point O. With the same plane end point. Consider another ray OB in the same plane. We observe that OB is obtained from OA through suitable rotation around  the point O. We say OB subtends an angle with angle OA. The amount of rotation is the measure of this angle.

We know a geometrical instrument called protractor which is used to measure the angles.

We Know, different types of angles:

Let us recall one by one,

Two angles are said to be adjacent angles, if both the angles have a common vertex and a common side.

While measuring the lengths are segments of the angles we observe the following rules:

Rule 1: Every line segment has a positive length. (The length of the line segment AB is denoted by AB or |AB|.)

Rule 3: Every angles has a certain magnitude. A straight angles measures 180°

Rule 4: If OA, OB and OC are such that OC lies between OA and OB then ∠AOB = ∠AOC + ∠COB

1. Draw diagram illustrating each of the following situation:
a) Three straight lines which do not pass through a fixed point.

b) A point and rays emanating from that point such that the angle.

c) Two angles which are not adjacent angles, but still supplementary.

d) Three points in the plane which are equidistant from each other. 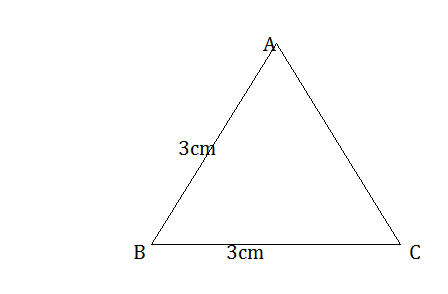 2. Recognise the type of angles the following figures: 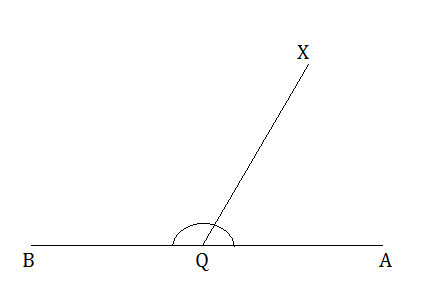 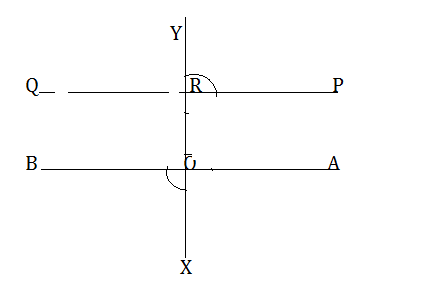 3. Find value of x in each of the following diagrams: 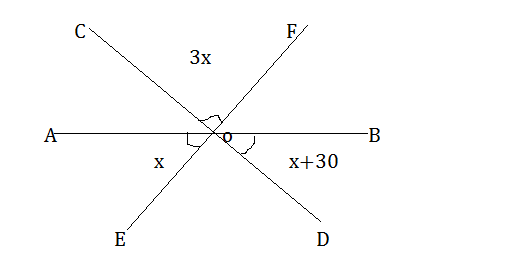 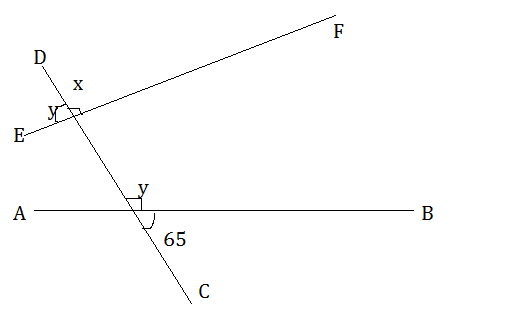 5. Suppose two adjacent angles are supplementary. Show that if one of them is an obtuse angle, then the other angle must be acute. 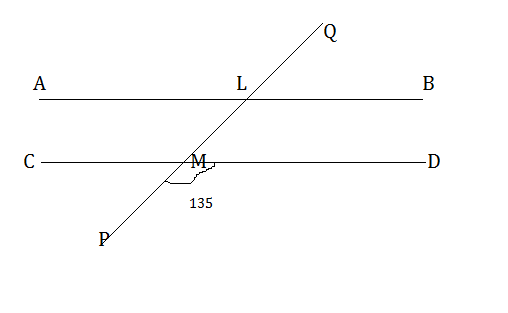 2. Find the value of x in the diagram below:

4.Let AB and CD be two parallel lines and PQ be transversal. Show that the angle bisectors of a pair of two interior angles on the same side of the transversal are perpendicular to each other.

1 thought on “Axioms, Postulates and Theorems”