A closed figure having four sides formed by joining four points, no three of which are collinear, in an order is called quadrilateral.

Quadrilateral is the union of four line segments that join four coplanar points; no three of which are collinear and each segment meet exactly two other lines, each at their end point.

A quadrilateral is convex if each of the internal angle is less than 180˚. Otherwise it is concave quadrilateral.

Let ABCD be a quadrilateral.

Adjecent sides and opposite sides:

Adjacent angles and opposite angles:

The diagonal AC divides the quadrilateral into two triangles, namely, triangles ABC and triangles ADC. Name the triangles formed when the diagonal BD is drawn.

Theorem 1: The sum of the angles of quadrilateral is 360˚

Given:  ABCD is a quadrilateral

Thus, the sum of the angles of quadrilateral is 360˚

Example 1: The four angle of a quadrilateral are in the ratio 2:3:4:6. Find the measures of each angle.

To find: The measures of each angle.

Example 2: In a quadrilateral ABCD, ∠A and ∠C are of equal measure; ∠B is supplementary to ∠D. Find the measure of ∠A and ∠C.

Example 3: Find all the angles in the given quadrilateral below: 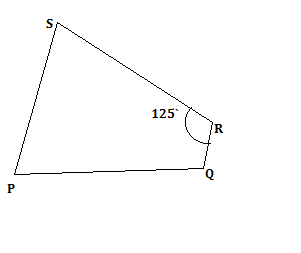 90°. Find the measures of the other three angles.

4.In the adjoining figure, ABCD is a quadrilateral such that ∠D + ∠C =100°. The bisectors of ∠A and ∠B meet at ∠P. Determine ∠APB. 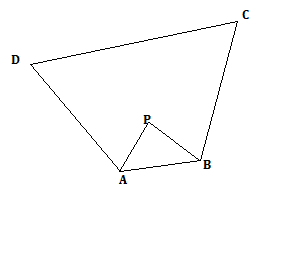 AP and BP are angular bisectors

The set of fundamental have a pair of opposite sides which are parallel. Such a quadrilateral is known as trapezium. 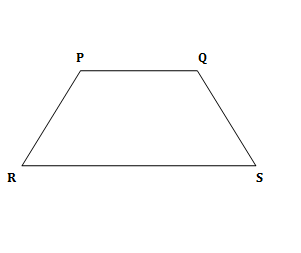 Observe that, ∠A + ∠D = 180° (a pair of adjacent angles of a trapezium is supplementary.)

Example 5: In an isosceles trapezium PQRS, ∠P and ∠S are in the ratio 1:2. Find the measure of all angles. 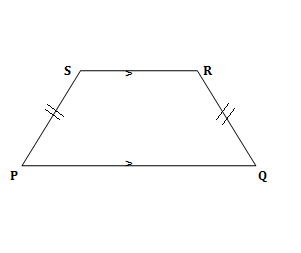 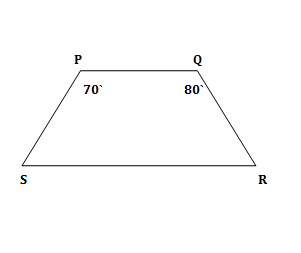 2. In a trapezium ABCD with AB || CD. It is given that AD is not parallel to BC. Is ΔABC ≅ Δ ADC? Give reasons.

4. Proof that the base angles of an isosceles trapezium are equal.

Look at the following sets of quadrilaterals:

A quadrilateral in which both the pairs of opposite sides are parallel is called a parallelogram.

Example 6: The ratio of two sides of parallelogram is 3:$ and its perimeter is 42cm. Find the measures of all sides of the parallelogram.

Example 7: In the adjoining figure, PQRS is a parallelogram. Find x and y in cm.

EXERCISE 3.5.4
1.The adjacent angles of a parallelogram are in the ratio 2:1 Find the measures of all the angles.
Solution:

2. A field is in the form of a parallelogram, whose perimeter is 450 m and one of its sides is larger than the other by 75m. Find the lengths of all sides
Solution:

Data: ABCD is a quadrilateral,
AB = DC, AD = BC
To Prove : ABCD is a parallelogram
Construction: Join DB

A rectangle is a parallelogram whose all angles are right angles.

Diagonal properties of a rectangle:

(i) The diagonals of a rectangle are equal

(ii) The diagonals of a rectangle bisect each other.

Example 8: In a rectangle XYWZ, suppose O is the point of intersection of its diagonals. If ∠ZOW = 110º. Calculate the measure of ∠OYW.

Now, OYW is an isosceles triangle, as OY = OW. Hence,

A rhombus is a parallelogram in which all the four sides are equal.

Example 10: The diagonals of a rhombus are 24cm and 10cm. Calculate the area of the rhombus.

We are given that AC = 24cm; BD = 10cm. We know that the diagonals of a rhombus bisect each other at right angles. Let O be the point of intersection of these diagonals. Then we have AO = CO = 12cm and BO = DO = 5cm. We also know that AOD is right angled triangle. Hence the area of triangle AOD is

A square is a parallelogram, in which

(i) in which all the sides are equal

(ii) each angle is right angle

Example 12: A field is in the shape of a sqaure with side 20m. A pathway of 2m width is surrounding it. Find the outer perimeter of the pathway.

Kite is a quadrilateral in which two of isosceles triangles are joined along the common base.

EXERCISE 3.5.5
1. The sides of the rectangle are in the ratio 2:1. The perimeter is 30 cm. Calculate the measure of all the sides.
Solution:

ABCD is a rectangle

Diagonals AC and BD bisect each other at O and AC = BD.

May not have all the properties of a rectangle.

Data : ABCD is a rectangle.

AC and BD are the diagonals.

Proof : In ΔABC and Δ ABD

Shape (see fig) whose parallel sides have lengths 15 m and 25 m. What fraction of the yard is occupied by the flower bed?

ABCD is a rectangular yard

ABCD is a rhombus

Solution:
Perimeter of the square ABCD = 4 ×side

14. A square field has side 20m. Find the length of the wire required to fence it four times.