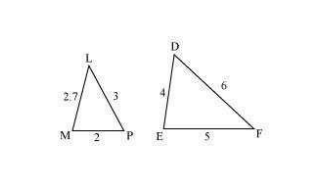 (iii)The given triangles are not similar as the corresponding sides are not proportional.

(iv)The given triangles are not similar as the corresponding sides are not proportional.

(v)The given triangles are not similar as the corresponding sides are not proportional.

DOB is a straight line.

3. Diagonals AC and BD of a trapezium ABCD with AB || DC intersect each other at the point O. Using a similarity criterion for two triangles, show that AO/OC = OB/OD

Using (i), we obtain 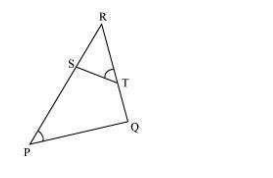 7. In the following figure, altitudes AD and CE of ∆ABC intersect each other at the point P. Show that: 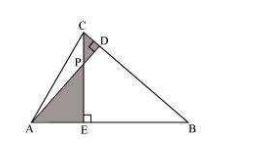 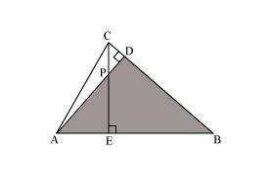 8. E is a point on the side AD produced of a parallelogram ABCD and BE intersects CD at F. Show that ∆ABE ∼ ∆CFB

∠A = ∠C (Opposite angles of a parallelogram)

9. In the following figure, ABC and AMP are two right triangles, right angled at B and M respectively, prove that:

(10) CD and GH are respectively the bisectors of ∠ACB and ∠EGF such that D and H lie on sides AB and FE of ∆ABC and ∆EFG respectively. If ∆ABC ∼ ∆FEG, Show that: 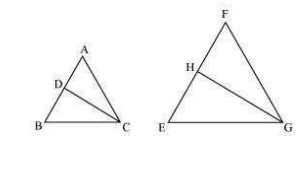 11. In the following figure, E is a point on side CB produced of an isosceles triangle ABC with AB = AC. If AD ⊥ BC and EF ⊥ AC, prove that ∆ABD ∼ ∆ECF

It is given that ABC is an isosceles triangle.

12. Sides AB and BC and median AD of a triangle ABC are respectively proportional to sides PQ and QR and median PM of ∆PQR (see the given figure). Show that ∆ABC ∼ ∆PQR. 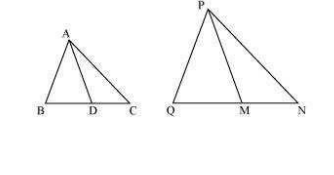 Median divides the opposite side.

13. D is a point on the side BC of a triangle ABC such that ∠ADC = ∠BAC. Show that

We know that corresponding sides of similar triangles are in proportion 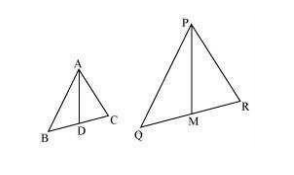 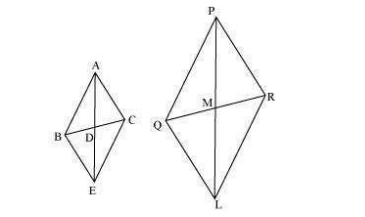 We know that medians divide opposite sides.

And, PM = ML (By construction)

In quadrilateral ABEC, diagonals AE and BC bisect each other at point D.

Therefore, quadrilateral ABEC is a parallelogram.

Similarly, we can prove that quadrilateral PQLR is a parallelogram and PR = QL, PQ = LR

It was given that

We know that corresponding angles of similar triangles are equal.

15. A vertical pole of a length 6 m casts a shadow 4m long on the ground and at the same time a tower casts a shadow 28 m long. Find the height of the tower.

Let AB and CD be a tower and a pole respectively.

At the same time, the light rays from the sun will fall on the tower and the pole at the same angle.

Therefore, the height of the tower will be 42 metres.

16. If AD and PM are medians of triangles ABC and PQR, respectively where ∆ABC ∼ ∆PQR provve thta, AB/PQ = AD/PM

It is given that ∆ABC ∼ ∆PQR We know that the corresponding sides of similar triangles are in proportion.

Since AD and PM are medians, they will divide their opposite sides.