Suppose we have a ray OA on a plane with end point O. With the same plane end point. Consider another ray OB in the same plane. We observe that OB is obtained from OA through suitable rotation around  the point O. We say OB subtends an angle with angle OA. The amount of rotation is the measure of this angle.

We know a geometrical instrument called protractor which is used to measure the angles.

We Know, different types of angles:

Let us recall one by one,

Two angles are said to be adjacent angles, if both the angles have a common vertex and a common side.

While measuring the lengths are segments of the angles we observe the following rules:

Rule 1: Every line segment has a positive length. (The length of the line segment AB is denoted by AB or |AB|.)

Rule 3: Every angles has a certain magnitude. A straight angles measures 180°

Rule 4: If OA, OB and OC are such that OC lies between OA and OB then ∠AOB = ∠AOC + ∠COB

Theorem 6.1 : If two lines intersect each other, then the vertically opposite angles are equal. 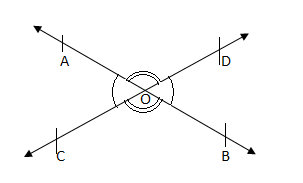 Parallel Lines and a Transversal

Recall that in the earlier classes, you have named some pairs of angles formed when a transversal intersects two lines. These are as follows:

(d) Interior angles on the same side of the transversal: