Since ABC is an arc of the circle with centre O, which makes an angle AOC = angle AOB + angle BOC

Therefore, ∆AOB is an equilateral triangle.

⇒ ∠OPR = ∠ORP [Angles opposite to equal sides are equal]

Since the angles in the same segment are equal.

We have find ∠BAC

Therefore, ∠BCA = 30° [Opposite angles of an isosceles triangle]

Diagonals AC and BD of a cyclic quadrilateral are diameters of the circle through the vertices A, B, C and D of the quadrilateral ABCD.

We have to prove quadrilateral ABCD is a rectangle.

We know, all the radius of the same circle are equal.

Thus, the diagonals of the quadrilateral ABCD are equal and bisect each other. 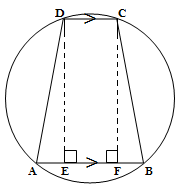 To Prove : ABCD is a cyclic trapezium.

⇒ Sum of a pair of opposite angles of quadrilateral ABCD is 180°.

⇒ ABCD is a cyclic trapezium

Since angles in the same segment are equal. 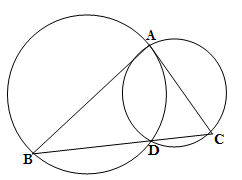 Given: Two circles are drawn with sides AB and AC of ∆ABC as diameters . The circle intersect at D

To prove: D lies on BC

Join A and D

Proof: since AB and AC are the diameters of the two circles[given]

On adding, we get,

⇒BDC is a straight line

Hence D lies on BC

∆ABC and ∆ADC are right angles with common hypotenuse AC. Draw a circle AC as diameter passing through B and D . Join BD

Clearly, ∠CAD = ∠CBD [since angles in the same segment are equal] 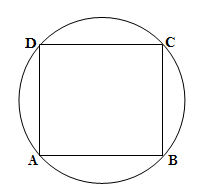 Given: ABCD is a parallelogram inscribed in a circle

To prove: ABCD is a rectangle

Proof: Since ABCD is a cyclic parallelogram

Therefore, each angle of ABCD is of 90°

Hence, ABCD is a rectangle.